You are here: home » all books » scotland's buses

During the 1960s, Harry Hay (a Scot who was to work for the rest of his life in the bus industry) travelled extensively throughout his native country, photographing buses in colour. Some of his images of older and rarer vehicles may now be unique, certainly in the liveries and locations depicted. Few of those in this book have ever been published until now.

When Harry died prematurely in 1991, friend and bus journalist Stewart J Brown inherited his collection of photographic negatives (“a treasure trove”, as he describes it in his introduction), and for years planned a book to celebrate Harry’s work in print.

Scotland’s Buses in the 1960s is the result: a stunning journey through a lost landcape of colour and variety in the bus world – one that is also a meticulously reseached and authoritative commentary on the many bus types and operators during this classic period in the Scottish bus industry’s development.

A snapshot of Harry (right) taken at John O’Groats with his new Ford Cortina. Also seen are Stewart J Brown (centre) and another friend, Gordon Ferguson.

In the 1960s most bus photographers were still using black-and-white film. A few were shooting colour slides, and an even smaller number, colour prints. The reason for the dominance of black-and-white was simple: cost.

For most of the 1960s I was a teenager, using a Voigtlander folding camera which took eight photographs on a roll of 120 film. Film was expensive, and was used sparingly.

Harry Hay was a few years older than me ... and could afford to spend more on film. His choice of colour negative rather than colour transparency was a simple one. He argued that you could look at colour prints at any time, where with colour slides you needed a screen, a projector and a darkened room to view them properly. 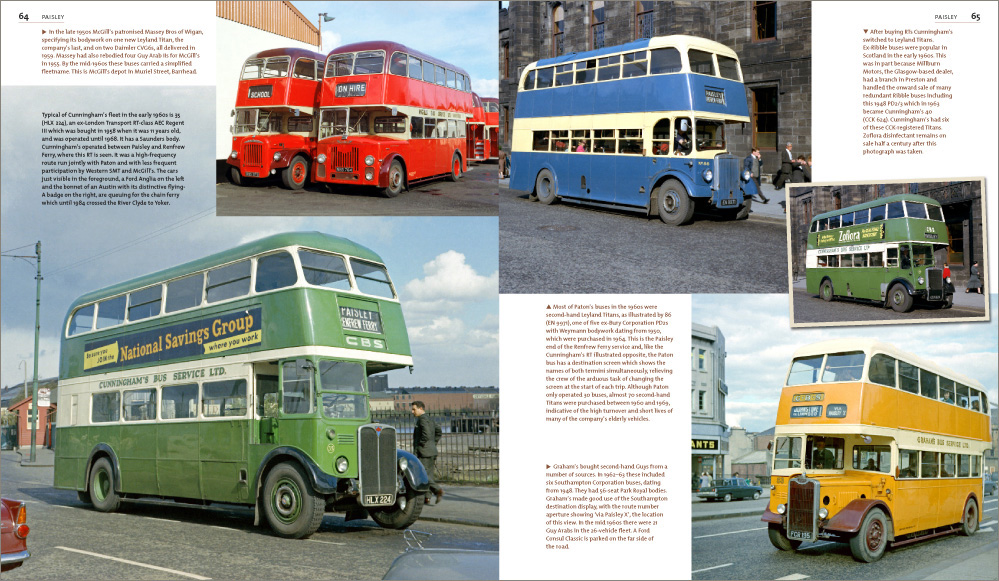 Typical of the picture spreads in Scotland’s Buses in the 1960s is this example from pages 64-5, which is taken from the chapter on the Paisley area. Seen here (clockwise) are two Massey-bodied buses of McGill’s; a Weymann-bodied ex-Bury Leyland Titan PD2 of Paton’s; a 1948  ex-Ribble all-Leyland PD2 of Cunningham’s; an ex-Southampton Park-Royal-bodied 1948 Guy Arab of Graham’s; and a Saunders-bodied London Transport RT acquired by Cunningham’s in 1958.

Independent groupings on the Clyde coast 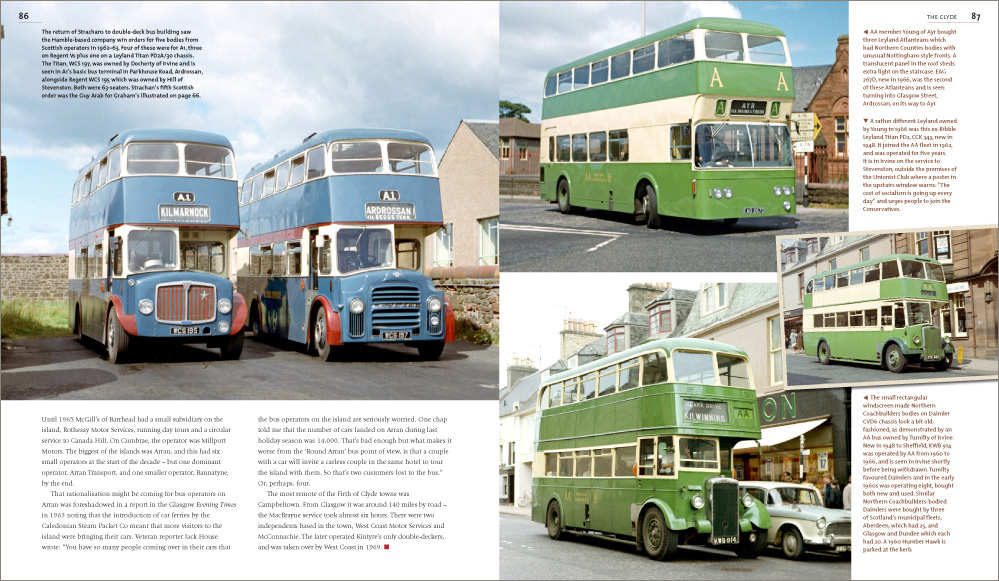 The Clyde coast in the 1960s was the land of the independent co-operatives – individual businesses working together under shared branding. Clockwise, this spread shows two Strachans-bodied double-deckers in A1 livery – an AEC Regent of Hill and a Leyland Titan of Docherty; a Nottingham-style Leyland Atlantean new to AA member Young; an ex-Ribble all-Leyland Leyland PD2 of Young; and a 1948 Daimler CVD6 with Northern Coachbuilders body, new to Sheffield and acquired by Tumilty of Irvine in 1960.

Title
Scotland’s Buses in the 1960s

As a further bonus, there are illustrated stand-alone sections on: 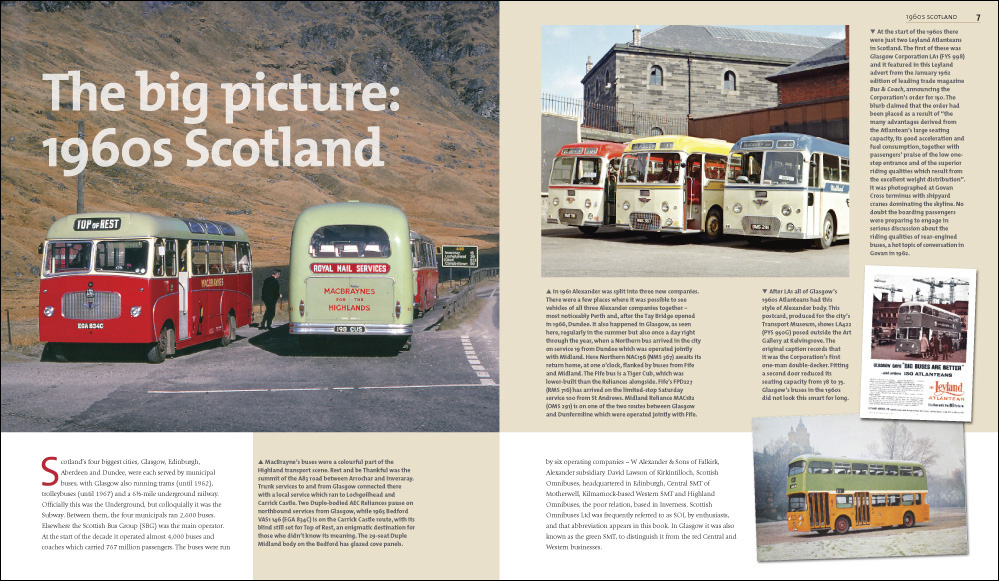 Spread from chapter on Glasgow 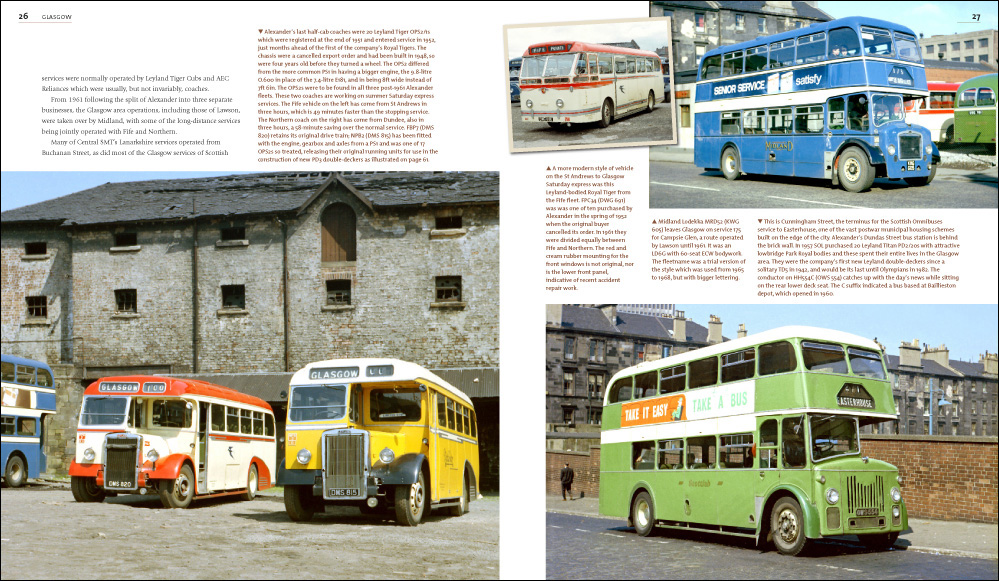 Spread from chapter on the Clyde 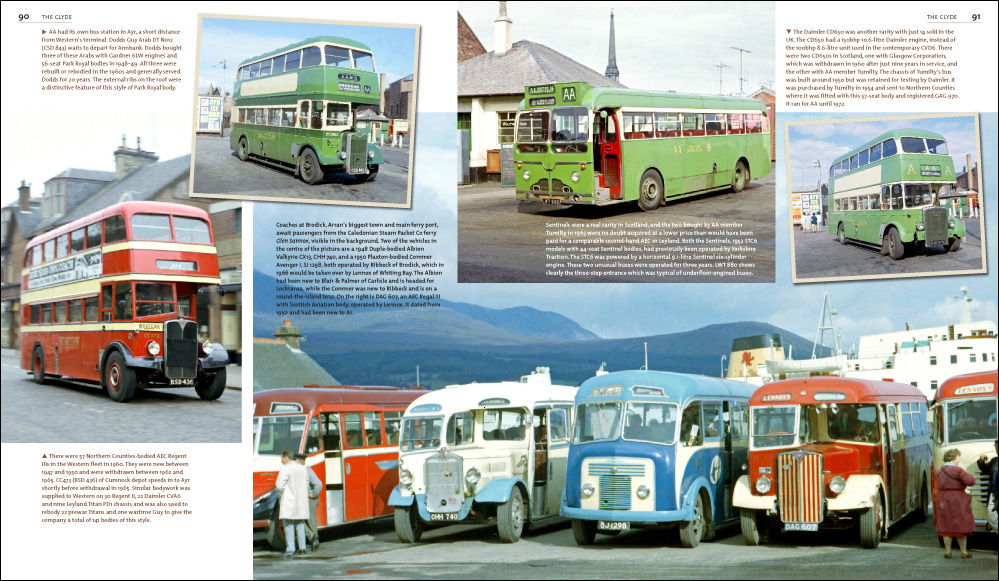